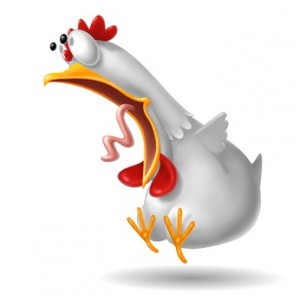 That was one of my dear mother’s favourite put-me-downs when the males of the house failed to live up to her expectations. For example, when Dad won a chicken in a raffle at a football match. Everyone one was pleased, Sunday dinner was going to be a treat that week! A proper man came to the door to deliver the chicken from his farm. Unfortunately,  in addition to the hen, he brought with him an unexpected problem. The bird was still alive!

Mum said to Dad “trust you to go and win a live chicken, now you’re going to have to kill it.”

“Do it outside” she added “not in here.”

So out into the garden we all trooped, ready to witness bloodshed.

Now chickens aren’t as daft as they look, and as soon as this one felt the warm earth under its feet it was off, flapping its wings in a desperate attempt to get airborne and clucking like buggery. The commotion attracted a row of heads above our neighbour’s fence. Even the ancient one-toothed Grandma parked in a chair in their garden put down her knitting to watch.

With a little help from the dog, Dad managed to corner the hen and grasped it firmly between his knees. The watching crowd fell silent. He got hold of the bird’s neck and started twisting it. He wrung it as you would a sopping wet towel, such that the chicken’s head corkscrewed steadily closer to its plump body. “There,” he said, letting the carcass drop to the ground, “dead as a dodo.”

The audience looked on in awe at this cold-blooded demonstration. The one-toothed granny clasped her hand over her mouth, almost poking her eye out with a knitting needle. There ensued a moment’s silence, and then another.

Suddenly, with no warning whatsoever, the chicken just kind of exploded. It span in a whirl as its neck uncorkscrewed, the head going in one direction, whizzing past its body going in the other.

Screeching abominably as it went, the resuscitated bird careered around the lawn like a demented crackerjack. At one point its head got rooted to the lawn while its body prescribed frantic circles around it. It eventually ended up under the lupins, where it pecked angrily at the cat fast asleep under them and which shot six foot up in the air, to the obvious delight of the dog, which yapped gleefully and chased after its own tail until it got dizzy and crashed into the coal bunker.

“Sod this for a game of soldiers,” said Dad.

“Call yourself a proper man?” came the inevitable comment from her ladyship.

We probably had mutton for dinner that Sunday, I don’t rightly recall. That may also have been the day he threw the cheese out of the fanlight.