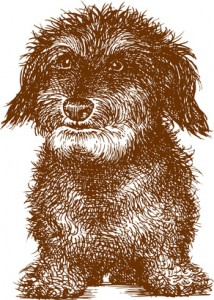 Bucket was just the kind of brindle, shaggy, matted-coat mongrel, complete with a servile smile on its chops, that genteel Frinton-on-Sea cats like Spade detested. The cack-handed cur was forever chasing things and bringing them ingratiatingly back to those half-wit humans with whom they shared a den.

On one occasion the humans had shorn off all Bucket’s fur and the moronic mutt had pranced about all day looking pleased with itself and licking itself in places it seemed to not know it had. Spade could not imagine why; the useless yap-machine looked like a handful of elastic bands and was only a third of its former size.

Bucket didn’t worry himself with such anger or angst. If clipping him kept Superwoof and Superbitch happy, it was no skin off his snout. He had turned up one day on their doorstop with a baby’s plastic beach bucket in his mouth. They’d taken him in, dubbed him Bucket, and let him join their pack, and now he didn’t have a awful lot to do with his days.

Superwoof was known as Uncle Bill in the human world and his bitch was Auntie Barbara of the bad breath. Bad, that is, to the human snout; because Bucket thought she smelt just fine and wagged his tail as she fussed over him.

In Frinton, Auntie Barbara’s other problem was her rough London accent that carried loudly on the sea air as she yelled “Bucki’, Bucki’, Bucki'” to summon her dog in for food, or before it rained. Like most cockneys, she dropped the final T – unless she was shrill with anger or showing off, which wasn’t often.

So when she hollered, Frinton ladies would wince and hide their faces behind their hands, but children would snigger openly. “Oi Missus, lost yer bucket again, ave yer?” the more daring amongst them might mimic. “Come ‘ere an’ say that if yer fancy a fick ear,” Auntie Barbara’d reply. She meant it, too.

On one rare Frinton summer’s day, butterflies flitted over a clump of lupins upon which bees and bluebottles settled and underneath which lay curled up Spade asleep, with only his right ear betraying an occasional twitch or flicker. Sleek black fur was Spade’s camouflage as he snoozed beneath the flowers that bordered the lawn, snug up against next door’s creosoted wooden fence.

Bucket was doing his rounds. He sniffed at an orange-coloured slug and then barked at it. It didn’t want to play so he licked it to see if he could eat it. Losing interest, he cocked his leg up and peed on it. Next he tugged and growled at an old army boot he’d unearthed the previous day at the bottom of the garden where nobody went. He scratched furiously with both front paws under the rhubarb patch, snuffling an imaginary mole. Then, for no particular reason, he took off as fast as his legs would carry him, across the lawn and up to the front of the house, then he turned round and raced back again to where he’d just come from.

As Bucket sped past the lupins, Spade jerked his head up and corkscrewed it round to see what was going on. When he saw it was only that demented dog he yawned and stretched, twisted his body languorously over and lay there with back legs asplay, put one front paw over his eyes and pushed the other one forward to nowhere in particular, so to doze.

Thus time whiled easily away until Superbitch appeared at the top of the garden, dressed in a flimsy, flowery frock – she liked the feel of loose, frilly flowing things – and called “Bucki’, Bucki’, Bucki’!” at the top of her voice. As she did so, next door’s ten-year old twins, stationed behind the fence, suppressed a giggle. They had found a big old rusty farmer’s bucket in a dump and had lugged it home for just such an occasion.

But Bucket was in no hurry. He was mighty scared of Superdog but he had the upper paw with the boss’s bitch although more often than not he did her bidding because she happened to be clever at finding food for him. Right now he was busy. He’d come across some juicy broad-bladed grass which he found irresistible; he felt compelled to chew it until it made him cough and lick up the sick. His teeth gnacked as he gnawed at the grass – hard work for a dog.

That was the twins cue. But as, in answer to her call, they set about lobbing their rusty bucket over the fence hoping to make it drop at the feet of Auntie Barbara of the bad breath, they got in each other’s way. Instead of soaring high, the bucket barely cleared the fence, and dropped with a clatter amongst the lupins.

It’s uncanny how quickly a cat can catapult if a rusty bucket crash-lands in close proximity to its pink comatose nose. Spade cape-canaveralled six feet into the butterflyosphere. A cat’s body appeared above the lupins and hung there in startled suspended animation. Back arched and hackles up, it was if it had been hooked onto a fishing line by the scruff of its neck, its legs and head adangle.

The scene caught Bucket in mid-pee as he was christening the clothes prop. The sight of that snooty cat in such undignified pose was a woofer’s delight. “Too good to miss, this is,” he thought as he set off at full pelt, spraying pee drips behind him, “I’ll catch that moggy before it hits the ground.”

Of course it was too late by the time he got there and what’s more Superbitch made a grab for him. Body-swerving with ease he got sidetracked into a new game. Darting and weaving, he avoided Superbitch’s every lunge. Off he went, yapping and leaping, from one end of the lawn to the other, until a flea nipped him in the unmentionables. Plonking himself down on the lawn, he thrust one rear leg in the air and had a scratch and a nibble and then a nibble and a scratch.

Alert from the corner of one beady eye, Bucket saw Superbitch bearing down on the old rusty bucket and, better still, Spade creeping low along, his body no more than an inch from the ground, looking wonderfully worried and wondering where the next danger was coming from. Leaping up, Bucket carried on careering. He whizzed around Superbitch, bobbed up at her as he passed and scampered away.

On the next lap, Bucket came up behind the cat and scooted it along until it darted under the rose bush next to the lupins, from whence it looked back in anger and swore at him and, whenever he went near, dabbed angrily at his nose. A dog has his pride, so Bucket woofed and casually wandered away. Then he broke into a jog, and then a gambol and then a gallop.

Next time round, dog and frilly frock got entangled. Bucket’s canines became inextricably entwined with the frippery of Auntie Barbara of the bad breath’s fair weather finery, and the mutt’s momentum lifted him clear of the ground and swung him around her like a fairground airplane until, after a resounding rip of tearing taffeta, he landed theatrically and tore away with mouthful of torn material between his teeth.

Superbitch, as indisposed as she was indecently exposed, paled with rage at Bucket. Pallid and palpitating, she pulled the rusty farmer’s pail from the lupins and propelled it back over the neighbour’s palings. What a palaver! It landed smack on the toe of the twins’ dad, who immediately picked it up and lobbed it back again over the fence. This time the rusty object fell heavily upside down through the rose bushes, where it dropped neatly atop Spade, entrapping him.

A caterwauling cat trapped in a rusty catafalque is not a common sight. It makes a nail-screeching noise and it was a long time since Bucket had had such fun.

“What the bloody hell’s going on here?”

“Don’t be so bleedin’ cheeky, and for bleedin’ Chris’sake catch that bloody Bucket.”

“Well,” though Bucket, “I might as well be hung for a whippet as a whelp,” and took off again in scampering circles around the garden, like a bone-headed bat out of Hell. He leapt at a shirt drying on the line and, to his dismay, it fell on top of him, quickly followed by the rest of the washing, so he had to tunnel his way out from under some damp sheets. In and out he weaved, tying the Superdogs in knots until one of them bashed into the other.

A line of heads appeared along the creosote fence; they belonged to Twins One and Two and to Mr and Mrs Neighbour, and all were legless with laughter at half-undressed, hopping Auntie Barbara of the bad breath and the stepped-on corn, standing in the middle of her now dirty clean washing, hurling abuse at her hapless husband.

Bucket braced himself for the worst as he began to tire and sure enough, as he set to swerve once more past Superbitch, a mighty kick from Superwoof sent him sailing through the air. A furiously pedalling Bucket crashed noisily into the rusty bucket inside which Spade squirmed and spat like a lady cat being spayed.

Free at last, Spade shot like a scalded cat (huh?) across the lawn, clawed his way up the last good leg of half-undressed, hopping Barbara of the bad breath and the stepped-on corn and, in a frenzy, launched himself from hopping Barbara of the etc. etc.’s bare bosom across to Uncle Bill’s shoulder and from there to the apple tree trunk, which he missed and fell in an unfeline heap and looked highly offended.

Seizing his chance amid the confusion, Bucket sneaked past the Superdogs and streaked up into the house, wolfed down the food in the dish that was waiting for him there, and flopped down in his basket. True, there was a very tender spot on his rear flank where Superdog had kicked him, and he had cat scratches on his muzzle but all in all, thought Bucket, eyelids growing heavy, it had been a very good day.