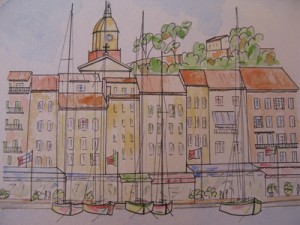 One balmy Mediterranean evening we drove Ethel into town and left her to fend for herself in the middle of a snooty crowd of garlicky Citroens, elegantly suntanned Porsches and filthy rich Mercedes Benz’ while we went off for a nice romantic meal and a stroll around the harbour to see if any famous people would recognise us and ask us for our autographs.

It must have been very late when we returned. Poor old Ethel had been jilted and we found her sitting alone and forlorn-looking in the middle of a big empty car park with nobody to talk to. Pleased to see us, Ethel kindly steamed up her windows for us so that the newlyweds could enjoy a well-earned kiss and cuddle. We were in that delicious period when lovers can’t bear to be more than a few centimetres away from each other for more than a few minutes.

Suddenly all hell broke loose, we were surrounded by a dazzling swirl of cold blue lights, screeching brakes and high revving engines. From one minute to the next poor Ethel found herself hemmed in by a snarling pack of black and white Renaults, out of which poured a snarling pack of black and white French policemen. “Vos papiers!” barked a particularly obnoxious poulet, rapping on the window and training his torch in my eyes.

Now in those days I was your typical meek and mild, ‘don’t kick up a fuss’ type of Englishman abroad although I must confess policemen have never been my cup of tea and this one was riling me. “Who the heck does he think he is, why should I show him my papers? Isn’t France supposed to be the land of romance?” I fumed, trying to get Ethel to cooperate by allowing her door window to slide open for once and not stick in the runners.“Vos papiers Monsieur! Passeport! Ouvrez la portière!”  raged the young flic as I searched in vain for my passport. “Don’t argue, just give it to him” said my wife sensibly. Eventually I found the life-saving identification, opened the car door and handed over my proudly-blue, hardback passport to Officer Merde.

From that moment on, the night degenerated into the surreal. As I studied the face of this seemingly sightless gallic prat (the peak of his cap was drawn down over his eyes), a drool of spittle emerged from a corner of his mouth and dangly-drooped its way down from his lower lip, like a splodgy white spider on a mission from ceiling to floor. “Garlic must have a strange effect on Young’s modulus of elasticity ,” I thought to myself scientifically. Well actually, no I didn’t, but it would have been a great thing to think, I think. Instead of that, the word “frogspawn” insinuated its way into my brain and I found myself unable to suppress a giggle.

No doubt disgruntled at finding my passport in order, Officer Merde poked his kepi-topped face of thunder inside the car and sneered “et la dame, montres-moi tes papiers,” just like that, with neither a please or a thank you and using the insultingly familiar “tu” form of address! By now, I was both incensed and having hysterics all at once, a quite bewildering sensation. “Grrr, tee-hee, grrr,” I spluttered, bulldog spirit rising to the occasion, “I’m British and I’m not having some jumped-up little frog Hitler insult my wife like that.”“Chéri, don’t argue,” hissed the sensible new Mrs T. emphatically, no doubt wondering if she’d done the right thing in getting married, “you’re only making it worse, for goodness sake let’s just do as he says.”

Then it dawned on me! Here was a golden opportunity, a once in a lifetime chance not to be missed. Never again would I be able to come out with such a line. “Officier, zat is no lady, zat is my wife!”  I piped up triumphantly.

Unfortunately, the famous old music-hall joke loses a lot in translation; it doesn’t mean a great deal to the French, they don’t have the culture you see. As it turned out, apart from me, no-one seemed to appreciate my little joke, indeed, I rather think it aggravated our case, and it took a lot of smooth-talking and smouldering-eyed, feminine bombshell charm from Jos, interspersed with withering looks in my direction, to get us out of the scrape.

Ethel was deeply offended by the whole episode. As she sped out of St. Tropez she backfired deafeningly, Ethel’s version of the effword.

3 thoughts on “Ethel and Officer Merde”