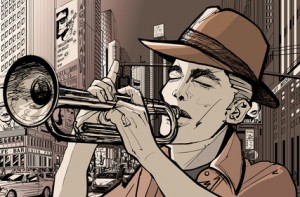 I haven’t heard Monty Sunshine’s Hush-a-Bye in decades. You probably won’t like it; it’s not today’s material. But in my mind’s eye I can see Monty standing there, blowing his heart out, up on the little stage in the big upstairs ballroom in the White Hart Inn in Brentwood High Street.

The ‘ballroom’ housed a weekly jazz club. An artist claiming to be related to Claude Monet had daubed huge murals on the walls depicting local characters and we imagined we were in Montmartre. They won’t remember it, but the likes of Eric Clapton and Jeff Beck played here, when rhythm and blues was taking over from traditional jazz. So did John Mayall’s Bluesbreakers and a host of others. In the jazz days, Terry Lightfoot and his Band were the club favourites. But Chris Barber with Monty were sheer class. Nobody danced when they were on, nobody tried to pick up any girls, you just stood and watched, a pint mug in your hand and your feet tapping in reverent silence. Then Monty would take centre stage and do his solo number and the girls would go all dreamy-eyed and jelly-knee’d.

I googled the White Hart and can’t believe what has happened to the old place. They tore down the ancient inn sign and threw it away. Then they ripped the soul out of the building and turned it into a “Sugar Hut”, whatever that might be. I hardly recognise it. “Proudly sitting at the heart of Brentwood High Street, The Village has changed the landscape of local expectations by offering an experience of Eastern culture fused with Western ideals creating a truly unique world that can only be truly understood through experience.” What is this pretentious bilge? I’m turning in my grave and I’m not even in it yet.

There’s worse. For all their high-falluting waffle they let the building catch fire and it nearly burned down. They’re sorry! [ed. Don’t bother to click, they took down their obsequious apology]. Sorry? The inn was built in the 14th century, Dick Turpin stayed here, countless stagecoaches changed horses here, many a pint was downed in merriment here, and in the 1960s a melancholy youth and his mates hung out here, drooling over superb long-legged birds unfolding their sheer nylon thighs out of Lotus Elans and e-type Jags, way beyond our reach.

In one bar, old-timers codgered; in another, bar billiards and shove-ha’penny were enjoyed while in yet another a mingling of all walks of life supped ale and told tales. A busty blonde barmaid from Rhodesia held court in an upstairs bar, serving schooners of sherry from the kegs that were all the rage at the time, to a leery band of budding journalists with only one thing on their mind. They were accompanied by a dishevelled press photographer who had a gammy leg and a heart of gold and who would never manage to sell anything to Fleet Street, his faithful Leica forever confined to pictures of forgotten flower shows and the occasional car accident.

One balmy July night, England’s solitary world cup victory was celebrated here and the e-type beauties mingled with the gaudy local scrubbers and the neck-tied old-Brentwoodonian Lotus Elan owners cheered alongside the old-timers, the budding journalists and the former secondary modern kids.

And the walls of the ballroom were decorated by a nephew of Monet and Monty Sunshine stood alongside Chris Barber and played his heart out as enchanted dolly birds in long black boots dreamt of naughty nights in old New Orleans. Yes, I remember it well…

Now look what they’ve gone and done. It’s as if none of this ever happened. Maybe it never did.