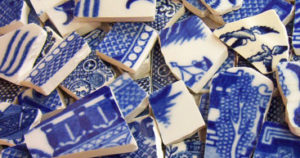 The years are all a jumble, like the blue willow bits of this broken cup. A few fragments big enough to recognize. Half a humpback bridge here, there two kissing birds, their love intact. No pagoda though, and the escaping ship is in shards.

Hey Eed, what year was it?

Eddy, lips aquiver, blows bubbles in his tea. What Eddy owes Edie adds up to a lifetime.

Eddy when he was a titch. Pink legs and albino hair. London overspilled to Essex with East End dad. And mum, and Tommy (brother to avoid). And Doreen, sister warm. High cheek-bones, cascading locks, puts Diana Dors to shame she does. Made him her knight. One day she hollers.

Blue-eyed Eddy, toy-sworded to the rescue. This bloke’s lying on top of her. And slap, and swish, get off her you lout. Why have you got no clothes on? And now I’ve got your boot, Blakeys and all. And bang, take that. Teach you to laugh. Ha-ha, bleed you bastard. Worth the beating you’re giving me. Didn’t hurt!

Get out! shrieks Doreen. Who to? And don’t ever come back.

Eddy fighting back the sobs, that’s no way to treat a knight.

Remember what year that was, Edie? No, of course you don’t. Why would you?

Come here, my little knight! Seventy years ago if it’s a day, sister cuddles to dry Eddy’s tears. Hold me and never let me go.

Doreen and Edie. Eddy’s only loves. Them and West Ham.

Eddy sucking tea through a Hello Kitty sippy cup. Not allowed proper ones in here anymore.

Oi you lot! Watch you effing language in front of my Missus!

It’s Eddy in the middle of his mates on Wembley Way. Edie dressed up to the nines for the cup final. Wearing red.

Remember that day Edie? Of all the colours you could have worn!

That was it with Edie, she was classy. In a Gidea Park sort of way. Eddy would never have done anything if it hadn’t been for Edie.

Here’s Eddy when he was a 1000-brick a day man, regular as clockwork. Struts his stuff along the scaffolding like an aristocrat. One day Edie walks by.

Cor, take a butcher’s at that!

Shut the fuck up! Our Eddy’s still a knight.

Harry hits Eddy with his hod.

Hey Edie, remember the day I put that hoddie in Harold Wood hospital?

Why are you shouting Grandad? She can’t hear you.

See what I mean, Edie? They say I’m going off my nut in here. Laying down the law, they are. Weren’t even a twinkle in their father’s eye most of ‘em the day the Hammers won the cup.

Eddy all togged up. Red tie, white jacket, looking dapper. They’re taking him to a wedding.

You won’t do nothing stupid, will you Grandad?

Panic rising, it’s like hanging on to scaffolding when it’s coming away from the wall. Not like Edie to be late.

You’d lose your head if it wasn’t screwed on! It’s Edie nagging Eddy good and proper. They’re off to a do, you see, if only Eddy can find the car keys.

Eddy supping brown and mild in the Boleyn. This geyser pipes up: ‘some people climb mountains, others cultivate, most just vegetate. A life is as long as it’s short so make sure you do something with it’.

Eddy clobbers him. Teach him to take the piss. Eddy spends his life blowing bubbles.

Eddy and Edie upstairs back seat on the bus. Edie’s shy. I bought this 45 for you, I love the words. Play it when you get home.

Well, he walked up to me, and he asked me if I wanted to dance. He looked kinda nice, and so I said, “I might take a chance”. When he danced, he held me tight, and when he walked me home that night, all the stars were shinin’ bright, and then he kissed me.

Gotta pop upstairs to see if everything’s alright. Never takes this long to get  herself dolled up.

Too-early Eddy pacing up and down outside Edie’s house. Big place up by the Royal Liberty School, all mock Tudor and apple blossom. A peck on the cheek, come in, he’s in the library.

Sorry son, nothing personal. But a brickie was not what we had in mind.

Doreen? What do you mean you’re not Doreen? You look just like Doreen. Edie love, it’s Doreen, she’s come to pick us up!

Eddy out of Edie’s place muttering profanities, sees a Royal Air Force handlebar moustache unfurl its blue-serge legs from a green MG. It swaggers past him, full of old chaps and toodle pips.

Exactly what they had in mind.

I don’t want your damn tea. Hey, get your hands off me! You’re the ones that’s confused, not me. Eddy, knees drawn up under his chin, blowing bubbles. They think I’m mad.

Bonnie and Clyde steaming along the Eastern Avenue, Eddy crooning at the MG wheel.

It’s now or never, Come hold me tight, Kiss me my darling, Be mine tonight…

Your Grandfather’s mind wanders so much, there’s not a lot we can do.

Here, drink your tea. Have you taken your pills?

Eddy’s blond and Edie’s ebony locks flying in the wind, her head upon his shoulder. Runs her fingers across his brow. My very own Adam Faith.

Hey Edie, remember when I watched you eat an apple? It’s the little things you remember best.

She can’t hear you Grandad. Face the truth.

And who are you?

Aging Eddy salt and peppery, worried stiff by Edie’s arrest. After all these years on Canvey Island. Doing not what her father had in mind. Behind a crooked fence, watched over by weeping willows.

Doreen? Tell Edie the MG’s at the bottom of Benfleet Creek.

Elderly Eddy hairless where it’s wanted and hirsute where it’s not. Looks in the mirror and spies a blond head balancing up on a red brick parapet. Must be the lord of the trowels. And there’s his lady. Hand in hand, two doves hovering over the void.

You’d better go now. You’ve been so kind to your grandfather but he’s no longer lucid.

Eddy, barefoot in a field of broken bricks, blowing bubbles at a red dust eddy, a dervish dancing at the east wind’s whim. Off it twirls across a bridge. To China with Eddy’s mind. Held high on a platter blue.

Grandad, before I leave, should I go and fetch Edie?

Look, whoever you are, don’t keep calling me that. So many strangers.

Oh, and who the heck is Edie?