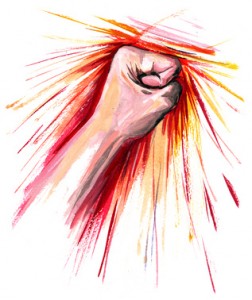 My old man left school at the age of 12 after his own father had gone and got himself killed for king and poverty in the first battle of the Somme. As de facto head of the burgeoning Taylor household in Roman Rd, Ilford, there was to be no schooling for him. In wartime the only work available for a dead dad’s lad was labouring on a farm. It was there that was kindled in him a love of that noblest of beasts: the cart-horse – affectionate giants chock full of muscle and gentleness.

Pushing into adulthood, he lied about his age and joined the beefy men who unloaded grain from the Thames barges that plied their trade up and down the east coast, their silent majesty camouflaging a life of drudge for those who worked them. It was unromantic work in the docks, too, and tough. Men fought for work. You got down to the warehouses before dawn, parked your pushbike and pulled your weight. Amidst the sweat and the toil of the long day nerves would fray and cruel practical jokes were played on the weaker individuals. Here a hundredweight stack of empty sacks would drop from aloft, there a deft knife would slit a gash in a sack of grain fresh-heaved upon a breaking back. The thirtieth haul of the day, more weight to grind your legs to jelly and sear fire into your lungs.

And now the ignominy of men’s laughter and the tell-tale trail of grain across the warehouse floor, pursued inexorably by the foreman’s ire and a tidy portion of your pay docked at the end of the day. The slit in the sack is an affront that must be avenged, under pain of worse things to come.

Out of sight, a space is cleared behind stacks of sacks of grain piled high. Men stop work and shuffle into the makeshift ring. The foreman melts silently away into the cloud of dust and smoke that lingers in the air and clogs the lungs. Occupied elsewhere. He knows the rules.  Men doff their caps and wipe their brows and wait tensely: fathers, sons and brothers. Few bets are laid, no one expects the kid to win. His friends, if he has any, rasp sandpaper tongues anxiously across parched lips. There is no escape from this. No talking, no negotiating, no intervention from boss or union man, no alternative to the broken jaw. Or worse. At best, banishment awaits the coward, at worst death in some cases, for the fearful and the brave alike.

Yet in this sordid ring, as two men strip to the waist and circle each other looking for an opening to land the first blow, an unwritten working man’s code is in operation. That code stipulates no weapons are allowed, no knives, no clubs, no bats. The crowd has come to life now; what must be must be. The bigger man takes from his belt a knife, and hands the cold-steel sack-slitter to a recently-beaten foe, whose crooked nose and empty eye-socket bear witness to his loss. The craggy docker spits purposefully into each palm, wraps a blood-red kerchief about his right fist, looks up and glowers at the jelly-legged lad.

If the cruel man has wits to match his brawn he will win this fight as easily as all those which came before. But callow youth and a cart-horse sized trough of pent-up anger is brewing in the dead soldier’s son and it will decide otherwise, against all the odds. For now though, our surly bully does not know this. Indeed not much penetrates that brain at all. It is his first mistake. Many a grown man has crashed to the floor in front of him, laid cold and bleeding or pleading for no more. Beaten men give him respect, and if they don’t he metes out more of the same. Such was the way of things deep inside the eyeless red-brick warehouses that lined the wharves of London’s docklands, not a century ago.

Here now comes the first blow. It’s a mighty red-fisted hammer, thrown with malice through a cloud of hate and porter fumes. Second mistake. Beer has a slick tongue when it comes to persuading men to fight but it makes an untrustworthy ally in battle. So the blood hammer kills oxygen molecules galore but fails to connect with teenage flesh. In his fear, the youth is lightning quick, in under the opponent’s guard, flashing one two three into the ribs, and backs away, as surprised by what he has just done as the older man, now coughing in front of him. A murmur of approval ripples through the watching hands.

Another red hammer flails the empty air and then comes another. Again the youth gets in close and works the old man’s body. Senses focussed ice cold clear, the boy knows now what he must do. Don’t go for the head, keep inside the old man’s powerful arms, sap the energy out of him, and the beer will do the rest. The boy hears his name called. “Come on George lad, you can beat the shit out of that old bastard!” The old bastard peers round to see who spoke such insolent words, notes the face, slits his throat with a finger and points it toward the culprit. That face, he tells himself, will be pulp before the pubs open tonight.

The crowd, however, begins to sense a different outcome, wagers are now being taken. The lad was frightened but now he starts to think he might escape unscathed. A mistake. Sticking to his plan, he dodges the hammer blows of the older man and comes inside, starts pounding again and pulls away. This time however he finds himself clasped in the iron grip of a bear. Squirm as he might he cannot break free and there is no referee to call ‘break’. But a knee there is, and this knee is grinding repeatedly up into his groin. And there is a head, and this head is butting him. And there is a leer, and this leer has teeth and those teeth are now sinking themselves into the flesh of his shoulder. And now there is pain, and where before there was hope there is now fear. The bear does not adhere to the working man’s ethic.

Set against the stiff breeze coming from the west, tacking full-laden up the estuary from the Essex mudflats, glides laboriously, gloriously, a traditional Thames barge, its sails dyed the colour of dried blood. A yellowing sun sets coldly over London, its light mingling with the smoke of the city, dappling the underbelly of rainclouds in swathes of gold. As the wind lightens and falls away, the black Thames water runs darkly no more and abandons itself to the sunlight. Look! It’s all of a shimmer; lapping and dancing, as if burnished by an angel’s brush. In this light, the ugly buildings and sad spires – with which decades of London architects sullied the quiet emptiness of the salt marshes and creeks that once lined these reaches – appear as brown mounds of formless meaning. Timeless moments such as these were known to the sailors working the river in those days. Finding words to describe the scene would have been beyond them. City folk would, in any case, not have understood. Today though, as dockers warm to a sordid fight between man and boy in a grain warehouse upstream, our sturdy sailors share their thoughts with the gulls wheeling overhead. “Beckton is as far as we’ll get tonight,” confides the captain to the shadow of a blood-stained sail as it bobs up and down in waters laden with silt, borne down from both Berkshire and beyond.

Could it be that this golden scene plants thoughts of the gates of heaven in the minds of our sailors? Be that as it may, back in the dark warehouse thoughts are more devilish and the atmosphere is laden. Young George’s eyes are popping as he panics, held fast in a vice’s grip. Time has slowed its pace, his head is swimming. Now he’s being pushed away, a gnarled hand is gripping the back of his head. A red-clad fist is being drawn back, any moment now it will slam into this young face, seeking to scar it for life. What to do?

Thank Heavens for hobnail boots! Essex ethics made no mention of them; back then in Barking nothing stopped you barking your opponent’s shin with them! Down to the bone, a boy’s boot stripped away a shard of aging flesh with sufficient force to disorientate a fearless fighter. Long enough for the lad to muster strength for another frenzy of anger-driven body blows, left right, left right, left right. Left right again. The crowd is cheering, the bully has put a knee to ground, he’s gasping for breath. “Finish the bastard!” All it needs is one more blow, this time to the head. Come on, just do it. But wait, the blood red kerchief has fallen to the ground, the bully is retching, he’s coughing up blood, people are spitting on him, he’s done. He keels over, coughing uncontrollably, nobody cares. Vengeance is sweet.

The young man picks up his shirt and passes through the crowd, which draws back to let him pass.

Forty years on that uneducated young man took up painting for a hobby. Here is one of his works. It now sits on the wall in my office. 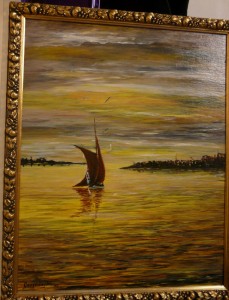