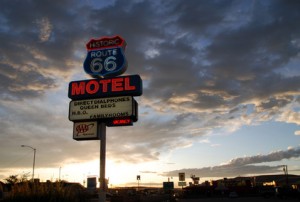 A long straight highway across the middle of nowhere approaches a small township out west. In my mind’s eye, blinded by the brash roadside hoardings that have been clamouring for my attention along the endless road for the last 10 miles, it is a bustling conurbation, full of life.

When at last we get there, the truth is a 6-lane Main Street with a single set of traffic lights controlling the point where it intersects with a pot-holed track which, to the north, leads to a dingy trailer park dotted with aluminium mobile homes beneath which slink cats wearing worried looks. To the south the track serves an ugly water tower of the type which features right across the American landscape –  a sort of cistern on stilts, bearing the town’s name in big, no-nonsense lettering.

On one side of Main Street stands a motel adorned with glitzy neon. It boasts a (No) Vacancy sign straight out of Psycho; flickering and crackling as dusk descends. Alongside, a family restaurant sits single-storied and spruce. Out front, a posse of red pickup trucks has gathered, never locked. Behind their cabs, in the open pick-up part, lolling-tongued dogs watch over fishing tackle, perhaps a ladder or two, and a pile of rubble.

On the opposite side of the main drag (cross it on foot at your peril!) sprawls an Exxon filling station, complete with seedy diner. Heavy trucks are lined up in workmanlike rows, ready for the next 500-mile haul.

Floating in on the wind from the railroad track beyond the trailer park comes the soft “whoo-whoo” of a diesel locomotive, one of the friendliest sounds you’ll hear in America, accompanied by the slow clatter-clatter of the half-mile of boxcars behind. Then, as night falls in earnest, a lull in the traffic allows a wide expanse of desert silence to wrap the place in emptiness, made mournful by the call of the whippoorwills and their tales of death and tumbleweed. In times gone by, sensible people would have retired indoors.

Now trundling in from the plain comes a mighty chrome-clad interstate leviathan, ablaze with light, hauling a load of douglas fir trunks – fallen tree gods on their final journey to be ground to pulp by steel jaws and forgotten. 40 tons of brawn draws majestically to a halt in the unlit parking lot around the diner and, as the driver shuts off the engine and kills the lights, it expels an angry hiss and falls silent.

The cab door opens and a behind the size of Arkansas emerges and lowers itself laboriously down, preceding a thick-set body clad in a red-plaid Canadian lumberjack shirt. Atop the body is a craggy, no-nonsense face and atop the slowly gum-chewing head sits a long-peaked baseball cap.

The peak points the way towards the steamed-up windows of the diner, inside which other baseball caps are lined up in a dutiful row at the long counter, eyes in unison following a blue-eyed peroxide blonde who has seen better days, as she serves toast and eggs sunny side up with mugs of thin coffee. These are her men. In her prime she might have been a star; to them she still is.

That’s it. Were you expecting more? That’s all there is to Nowheresville. Blink and you’ll miss it. Yet locals come here from miles around to line up at that solitary traffic light in Main Street, and maybe imagine they are in Manhattan.

I grew fond of Nowheresville as we crossed it many times out west in our humble Ford Escort. And imagined myself proud and gum-chewing at the wheel of one of those big red pickups, kicking up the dust along the dirt trail as we streaked away from the main highway, heading freedom-bound and dogs abarking for that distant butte above which now a harvest moon is rising.