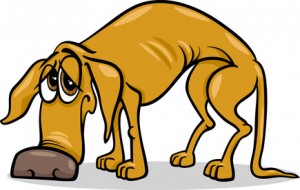 Lonely lamppost cold, giving up the ghost. On this empty street. Yellow grass dying between the cobblestones. Behind you a grime of masonry, white-streaked with pigeon droppings. Generations of them, coo-coo a poo. Night sky thick and barely seen; if it rains it will surely snow. Flickering sentinel, surges suddenly bright. Make the most of it while it lasts. Captured in your uncertain beam, the artistic remains of Fifi the poodle’s expensive meal. Mr Whippy take a bow.

Tell me now, were you to spy the infamous pile of Paris dog mess thus before you, two scoops in your path, would you still step in it? Ladies and gentlemen, I give you Alphonse B.

Alphonse Beet to be precise. Shuffling.

Pleased to meet you. If only it were true. Can you spare a euro? Feet aching, ankles sore, seeking somewhere to sleep. Here or elsewhere, what does it matter? Just make it a place away. From the smell of another man’s pee.

Alphonse B., draining the dregs, tongue in Burgundy. Alphonse B. the formerly proud, feet in Bercy where once wine was warehoused. When he was young and could do without it.

Alphonse B. day-dreaming in the Paris night. Shiny-shoed, long hair combed, stepping along the boulevard, making for the Fontaine Saint-Michel. Meeting Madelaine, not that she knows. He sees her still, white-booted and winsome, rebuffing advances while she waits. Just for me, thinks Alphonse B.

That was then but now is now.

Alphonse B., split-booted and sockless, fails to see what we have seen. Well isn’t that him all over? Steps right in it. Where there’s muck there’s Alphonse B.

Squelch. Feet skidding forward pursued by legs at speed. And splat, spread-eagled Alphonse B. sits right in it. Fifi’s legacy, not so fresh.

Now here’s a thing. Alphonse B. born Alfie Beet in Becontree, home to the overflow. Hopped on a hovercraft and never returned. Lately of no fixed abode, Paris, France. That’s Monsieur Alphonse, I’ll have you know, Tavel’s my tipple if you’re buying. And Saint-Amour for Madeleine.

Who sits griffon-flanked on the fountain’s edge, pink-frocked in gingham, arms all bare, 19 Gauloises in a pack in hand. Firm they are, longing for her lips. Ah Madeleine! Whose side do you take in this marble struggle? Winged St. Michael arms aloft or Devil felled if not for long? You came here seeking your man from Turkmenistan but all you see is Alphonse B. Tell us who you really see.

Why me, murmurs Madeleine, seeing right through Alf from Becontree.

Alphonse B. rue de la Bûcherie, dipping fingers in H2O, meets Lord Bromley-by-Bow. There’s no such lord, you can’t fool me, says Alphonse B. Shush laddie, they’ll never know. Here old fruit, why don’t you read this? Don’t care for Donleavy myself. Irish cunt. Or American – it’s all the same. What made me half inch it, shall never know. From Shakespeare and Co. Oh-oh, must go old boy, toodle pip.

Alphonse B., The Mad Molecule burning red in hand, pleads innocence to Shakespeare’s good lady. Prithee show me thy receipt, says she. But ‘twas not me sayeth he, ‘twas the good lord!

Alphonse B. perched bum on bollard rue de la Huchette, precariously. Leafs through J.P. Donleavy’s pricy tome, cost him his final francs. Plus the tax on his pride. The Romantic Life of Alphonse A. Now there’s a thought.

B-by-B 6ft 3. Look old boy, toddle back to Becontree or from wherever whence it was you crawled. We don’t want your sort here, gives us a bad name.

Or Benidorm, plenty of your sort there.

… I paid for the book you just stole!

Off you fuck now Becontree, be a good boy. I have heavies don’t you know.

Alphonse B., been off you fucking ever since.

C’est quoi ton nom? The name is Beet. Please don’t laugh. But laugh they do and do they laugh!

Do like Donleavy known as J.P. Or go one better, three initials instead of two. Alfred Peter Terence Beet. A.P.T. Beet.

Madeleine first encountered outside St. Sulspice, kaftan-clad, sniffing patchouli at a stall. Here try this, ventures Alphonse B. still Alfie. Madeleine smiles (but not at him). Comment tu t’appelles? Her voice is like a velvet promise. Here come two answers racing with the wind.

Here stands the man from Turkmenistan.

I say old boy, in French the adjective agrees with the noun. ‘Tis Bromley-by-Bow, pops up everywhere that one. Say it again for me, Becontree dear boy.

What have I said?

Such a shame, old fruit. I say, that’s not really your name, is it?

Petite, old boy, not petit. Not something I’d shout out on the boulevards myself but then I’m not from Becontree.

Alphonse B. head-scratchingly not in the know.

Madeleine arm in arm with Turkmenistan. Patchouli perfumed, hand over mouth, explaining French to Abdulayev. Stupid Engleesh says he has a petite bite.

Alphonse B. blushing blue. Walks hugging walls, seeking cracks inside which to crawl. No more surnames, it’s for the best. When’s the next train to Benidorm, from here on out I’m Alphonse B.

Alphonse B. heading west for air, right bank bound by the Pont Royal, a pauper passing through the palace gates.

Got cloth ears ’ave you mate? Told you to fuck off, didn’t he? Oh God no, it’s an emissary from Bromley-by-Bow. Now scarper or you’ll get my Eiffel Tower right up your fucking Moulin Rouge. And because bad news comes in threes, knees Alphonse B. right there in the Tuileries.

Alphonse B. of the tainted trousers, perfumed Eau de Fifi. Still seeking shelter Gare de Lyon way. Look now here’s a likely spot. Hello it’s me, Alphonse B. Got any Tavel? In case anyone’s in, you see. Here, behind the packing cases. You stink, fuck off! Off you fucking, it’s my life’s work.

My word would you look at this; rosé in a plastic bag, whatever will they think of next. Pauper’s traitor, warms the cockles but weakens the muscles. Alphonse B. winding down, life at ground zero, shivers and shakes; ‘d be better back in Becontree.

Sachet wine spills dammit when you squeeze it, why do I bother. These trousers could tell a tale or two. Of Fifi’s poo, of adulterated tipple and other men’s urine, oh dear no, my mistake, it’s my own. Tricolor trews, brown, pink and yellow. Smelly with it. Please God, when will it all end.

Alphonse B. standing on the Pont d’Austerlitz looking down. Plump and proper, Portuguese ladies passing by. Tut tut would you look at that. Jump Monsieur, do yourself a favour.

Roses in the silver dew. Alphonse B. by the poplars homeward bound. On foot a fortnight to the ferry, fucking off to Becontree. Farmer’s wife could you spare an egg? Farm dogs frothing, fangs free-ranging, bite a lot worse than their bark. Fuck off! Always fuck off. All the way through Picardie.

Alphonse B. bloody footed, hungry in the starry night. Stands silhouetted by the rising orb, glows forlornly a gentle shade. Of shit colour in the moonlight. If only I can make it to Calais.

Oh Madeleine, I see you fair. Come with me to Becontree. I’ll show you Parsloes Park and then maybe where May & Bakers once stood. Madeleine?

Alphonse B. in Airaines, feeding coins phoning home. Gordon Bennett strike me down, what the fuck do you want? No sign of life these 20 year, sling your hook.

Always was the weird one you was, wouldn’t have known you was alive if it wasn’t for that posh git from up Ilford way. In the Beacon Tree with Uncle Sid, said he’d seen you, you piece of shit. Knew it was you, perfect description.

Bromley-by-Bow you old so and so. In Becontree! When not in Neuilly-sur-Seine. Raised in Mayfair I’ll have you know, Tiddy Dols was my kindergarten. Fine woman my mother, liked her men, J.P. Donleavy and other gingerbread men.

This, my friend, is my first time east of the Princess of Prussia. Here, take my card. Yes, of course there’s such a lord.

Alphonse B. sobbing into his knuckles, licks teardrops from the handset. Can’t take this anymore, can I come home. Please send me fifty quid.

What the fuck happened to the money we gave your toff mate to give to you?

Alphonse B. losing the will. B-by-B’s a crook! Then go break his legs, don’t come snivelling to me.

I only wanted to come home. My kith and kin.

Yea, when it suits you. Fuck off back to Paris and sponge off the frogs. We’re respectable around these parts, don’t need no bad eggs like you.

Alphonse B. hell’s bells, I’ve made it up to Coquelles. Put my head under the sea. Soak away Fifi’s poo, do they drink Tavel here or, oh anything will do. Yes, yes, I’ll move along, no need to be vulgar. What’s that you say? Oh yes, fuck off.

Alphonse B. there he goes, drowning in fuck offs, trudging low.

Alphonse B. in the Jungle now, knee-deep in mud. Come with us. Here eat this. Nice young ladies ladling food. Syrian, Afghan, Eritrean, which are you? Becontree born and bred meself and how about you?

Helpers in huddles, this will never do. Honestly, the nerve of some people, how can you sink so low, stealing bread from the needy, migrants like Abdul and Mo.

Madeleine help me, my only love, I’m ebbing away.

Prayer or coincidence, Madeleine’s here, volunteer. As is Turkmen man. Madeleine, is that you?

Alphonse B. head all adither, wipes mud from face but skids on faeces. Retching and regurgitating. Not a pretty sight.

Alphonse B. unsuitable material for a migrant’s camp, thrown out by the refugees. What does that make me.

Prostrate on a dusty dune, waiting for the rain. It’s Alphonse B., just ten breaths left to live. J’ai toujours aimé Madeleine. That’s five. Rough written in the sand. Now off you fuck Alphonse. There go the rest.

Here lies Alphonse B. smellily dead. Sand in his could-tell-a-tale-or-two trousers, raindrops falling on his head. Which.

Wash away his life’s message.