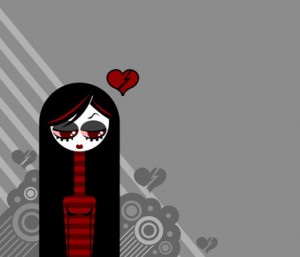 This Sunday April 15, 2007, as pearls of sorrow slide damply down the chill walls of a sad morgue somewhere near Nantes, where Sophie’s lovely smile is frozen timeless in death, 4000 people walk slowly sobbing through the streets of the Breton capital.

A mother is seen wailing before a placard bearing Sophie’s photo, “my daughter, oh my lovely daughter! How beautiful she is, my lovely child, so beautiful…” and then she sinks to her knees, “nothing will ever be the same again.”

Sophie was just 23 and worked as a shop assistant in a clothing store in a suburban shopping centre, where she served suburban shoppers and graced them with her sunny smile. With her striking good looks and that open, happy face, this young French lady might have been American.

Like most women of her age, following the fashion of the day, Sophie wore a thong that last day. It was clean and fresh when she put it on. But sperm-sodden and defiled when it was found not far from where Sophie’s body lay, one last smile etched on her features, albeit of abject terror.

Sophie was found face down, thighs blue with struggle against a brute who had forced entry through those rosy gates where no man has right to go uninvited, her neck compressed so no breath could pass, in a ditch alongside a motorway slip road, not five miles from where she had finished the final thong-clad day’s work of her too short life.

A haggard, shrivelled young man, broken before the anger sets in, detaches himself from the supporting arms about him and weeps.

“H-H-How? How could they do such a thing to her?” he beseeches the gulf of empty years that now stretch ahead of him, the ones he must face without Sophie and Sophie’s smile, “how could they?”

“Bring back the guillotine!”

“Whoever did this doesn’t deserve to live!”

“You mark my words, as soon as he gets out of jail, he’ll rape and kill again, society is too soft, it’s irresponsible to let him live. He must die for this.”

The crowd is angry, and so it might. But wait, what is this? A tall, dignified man steps forward and raises a quiet hand to quell the hate.

“Not me. For my part, I am against the death penalty. Meeting violence with violence solves nothing.”

Thus speaks the father of Alice, a teenager brutally murdered in similar circumstances in 2002.