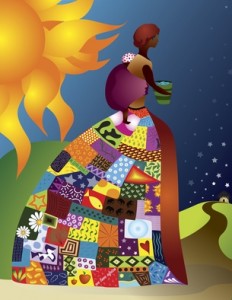 Stepping gingerly on Saturday around the dog dejections on the way back from La Poste, I found myself walking in the wake of an African lady. She was sheltering her considerable bulk under a multicoloured headscarf that had been wrapped about her noble prow in such a way as to make her seem taller than she really was.

As I wondered how I might manoeuvre around this galleon in full sail, bedecked as she was from head to toe in gaudy raiment that spoke of sun-baked ochre roads, gaiety and good sense, I chided myself for having picked the wrong moment for my walk, because this was going-home time at the local infants’ school (the children go to school on Saturday mornings here in France).

In these suspicious times in which we live, the sight of an aging man alone in the vicinity of a school is so soon seen as unsavoury. No more may he tarry, be it even a few seconds, alongside school gates, there to fill his ears with the sound of that carefree playground causerie that otherwise might lighten his heart and send him on his way as refreshed as if it were his own siblings chattering there, in fairer times long ago. So I hurried along the path and came up hard astern the good galleon in all her glory.

Approaching under a fair wind from the opposite direction, at about the level of the recently-installed speed bump, from which Renault Clios are wont to launch themselves and land heavily, thus etching scrape marks in the bitumen and spoiling the fresh white markings thereon, there came a milk-skinned woman in jeans with bosoms bursting, her newborn baby in pram and a little blond-haired brat of an angel jigging alongside, reciting nursery rhymes for her fresh little friend, who could still hardly unclench his tiny chilled-pink fists, however hard he tried.

Bounding with life, the child ran ahead of her mother, giggling despite the latter’s remonstrance to return. She dashed, she stopped, she dashed again, this time straight into the legs of the African lady, who scooped up the child in her arms in one graceful movement like the yardarms in a timeless sea, turning easily about a great oak mast, as the captain takes her around in a lightening breeze.

The child hugged the galleon and showered her with a shoal of wet kisses, to the white mother’s embarrassment and the black lady’s delight, and when she was done she did it all over again.

The two women shook hands, chatted together for a few moments, cooed at the baby in the perambulator, pecked each other quickly on either cheek in the fashion of the French and then continued on their respective ways.

The seas fell calm after the passage of the galleon, and a gentle breeze bore the news to Africa that all was well.