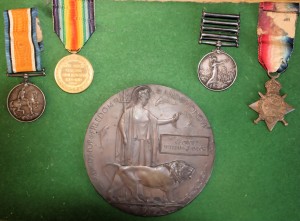 Grandfather George was a cook in the Great British Army. A veteran of several campaigns with the Royal Kents in the Boer war, he was, by all accounts, a popular man. As a ten-year old child, my father, another George, was fiercely proud of his Dad in uniform. He cut such a fine figure, with his clipped moustache and row of medals along his chest, a glossy metal identification medallion hung hidden around his neck.

Then came 1914 and Kitchener’s famous pointing-finger poster “Your country needs you!” Once again George answered the call, if indeed he ever had the choice. Off he went with his regiment to France, leaving wife Mabel and three young children to fend for themselves on a soldier’s pay in a 2-up, 2-down in Roman Road, Ilford.

The fields of northern France were a sodden, filthy, slime-filled vision of the apocalypse, with carnage and mutilation on such a scale that the gates of both Heaven and Hell had been slammed shut with “no vacancy until further notice” signs posted on them. Men and horses, and bits of men and bits of horses, were left to rot and stink their way into men’s hearts until ‘going over the top’ to face a clean bullet was all that most men prayed for, be they French, German, British or whatever.

Meanwhile, back in Roman Rd, Ilford, Mabel and her kids faced a different kind of hell. Cold, frightened, worried stiff. The war was only supposed to have been a short-lived affair; it would, the leaders said, be over within a few weeks.

Now no end was in sight, and terrible stories were filtering back across the Channel, despite the censorship. The only thing that was short-lived was people’s illusions. At night, the whole family huddled together in one bedroom in order to save coal and seek comfort in each other’s arms as they cried themselves to sleep.

Late one night, as the family shivered and slumbered, there came a blood-curdling scream from Mabel, and she shot bolt upright in bed. “I’ve seen your father” she wailed, “and now he’s gone!” At the tender age of 11, George junior had just become the de facto head of family and a simmering anger, which was never to leave him, welled up within him.

Two weeks later there came a heavy knock at the door of that little house in Roman Road, Ilford. A stiff, upright army officer stood there. Snapping to attention, he saluted Mabel, bewildering her, and then handed over George’s medallion. The only time he had seen it, young George had remarked how bright and shiny it was. Here it was again, this time cold and grey, mangled and tarnished. A token of a dreadful death.

Mabel accepted the gruesome offering and retreated empty-eyed and tearless into the house, still struggling to comprehend what was happening to her. She was sick with worry about the future and what she and her siblings would become. The army officer, however, did not turn to go; instead he stood stiffly rooted there.  “Go and fetch your mother, Sonny Jim, I have to see her on another matter”.

After the war, the War Office graciously sent Mabel a cheap cardboard tube with a cheap paper scroll inside, bearing the cheap inscription “Died for King and Country” and a cut-out news photograph of rows of crosses in Regina Trench Cemetery.

That day, however, the officer had something cheaper still on his mind. As the family gathered once again in the doorway of that little house in Roman Rd, Ilford, he let drop the unexploded bombshell that was to add insult to their injury. It came in the form of a bill from the great British Army demanding reimbursement of the advance on his cook’s pay which George had received. Jolly poor show that, dying in debt to your regiment.