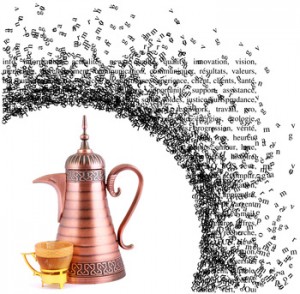 It was while he was serving tea in a Tunisian seaside hotel. Next to the hotel swimming pool was a cool, white-tiled tea-room in the moorish style. We tourists sat awkwardly in multi-cushioned easy chairs, set low in the north African way, while almond-eyed Mohamet, clad in rough but flowing white robes, politely aimed sweet tea from head height into small, thick, cheap glasses which had brightly coloured geometrical patterns painted around their rims. Mohamet poured tea from a metal pot with such calm pride that the whole room stopped to watch him work. Then he collected his money, almost apologetically, before returning to his place behind the tea counter. And smiled a smile with centuries of history in it. Mahomet, you see, was a teacher.

I got to know Mahomet a little better over the ensuing days. Talking to him I felt, if anything, even more ignorant than usual. He told me he worked the summer season in the tea-room, but Mahomet’s heart and home was in one of those two-goat villages made of mud, dung and straw out in the desert. He admitted to speaking four languages but I suspect he knew more. He had, he said, been offered a university teaching post in Tunis and dreamed of visiting Paris, particularly the Sorbonne, but considered he could never abandon the village children. A life-long loser in a world of wealth, Mahomet eked out a living serving tea to trivial tourists and took home a little cash to his family and kept the village school going. For all I know he is still there today.

One day there came a commotion from the swimming pool, so Mahomet went and stood at the door of his tea-room, and assessed the situation. “There’s nothing we can do,” he told the room grimly, “that young French doctor is very kind but you must go and stop him right away because he’s risking his life out there.” Intrigued, everyone went to see what was going on. Lying prostrate under six feet of water, on the floor of the pool, was a teenage girl. At the edge of the pool was a pink-skinned, speedo-clad man, frantically trying to extricate himself from the attentions of several baggy-suited Algerian men. “Are you completely crazy?” he yelled. “I am a doctor, there’s somebody down there drowning, we have got to get her out, NOW!”

For the doctor it was a case of life or death. His Hippocratic responsibility and all his human decency was screaming in his head to go to the Algerian girl’s aid. For the girl’s brothers preventing him, in contrast, it was a question of honour. Hard-eyed and determined, they would allow no man to compromise their sister’s pudency by setting eyes upon her, thus to bring shame upon her family. “Stop him, please” urged Mahomet again, quietly.

Mahomet explained that, unlike Tunisians, these Algerians clung to the old ways and would stop at nothing to defend the honour of the family. “We Tunisians are afraid of them. They prefer to let their sister die there, this is how they are. All Algerian men carry knives, it is folly for this doctor to persist, they will kill him. And if we Tunisians intervene they will come back later tonight with all the menfolk of their family and there will be bloodshed. This is how it is. There is nothing to be done. It is God’s will.”