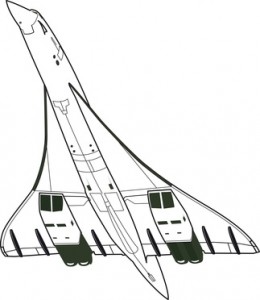 Roy’s wife cried more tears into a flagon of grief on the day the great white bird so graceful rose for the last time into the skies. She was, for the most part, past weeping, because, weak with weeping as she was, the water in her eyes had finally dried. She was, after all, filling her tenth flagon…

O how beautiful it was, that aircraft! Marcel Dassault used to be fond of saying that never a plane would leave his factories unless it was beautiful, and it must be said that machines designed in France are inevitably endowed with that elfin elegance that so characterises the hand of the French aeronautical engineer.

Thus bedecked in beauty it was that, one mournful autumn morning, Concorde set off on her last flight. What a splendid spectacle she made, champing at the bit at the lip of the runway on the day of her death! She roared, ready to pounce like a baying beast of prey, like the barely-tamed fighter aircraft that indeed she was.

In honour of the Entente Cordiale it had been decided at the design stage that the French would make the fuselage and design the aerodynamics. To the English fell the task of making the wing, and the engines beneath, and had it not been for Concorde’s engines Roy’s wife would not have become Roy’s wife, because her husband was an engineer who had come to France to work on the joint programme.

Roy spoke English with the round, fruity accent spoken in the western reaches of the perfidious island of Albion, in those very same lands through which Breton knights rode in search of King Arthur.

Roy mauled and mangled the French language in the same round, fruity accent, putting a smile on Roy’s wife’s face. That very same voice that brought tears of mirth to his adolescent daughters who, with their loving arms encircling his neck, dubbed him “our teddy daddy bear”.

Once the newly-crafted aircraft had taken to the air, test pilot André Turcat at the controls, in the erotically-charged year of 1969 so dear to Serge Gainsbourg, enthralled as he was by his amusing muse Birkin, the teams from England returned to their native shores. Minus Roy, however, for Roy loved Roy’s wife as dearly as Roy’s wife loved Roy.

Now there’s no denying that Roy enjoyed living in France. With his very own hands he built a house in Ile-de-France, beneath which he excavated a basement that ran the full length of the edifice, and which he used to house his old Alfa Romeos from the Dolce Vita days, for Roy, like all his fellow-countrymen, had a romantic heart.

Roy smoked too much. Roy drank too much. He worked too hard too, day and night. Roy smelt bad in the morning, having spent the night in his den, translating technical manuals, because that was the pretext he had found for staying in France.

–“No problem pal, think nothing of it,” he would say to his customer, “couldn’t leave you in the shit, could I?”

–“Morning Daddy. Pfwoaar, yuk Daddy, you stink like a bear!” one of his daughters reprimanded him that day, although secretly not minding, shameful as it was, being impregnated by that awful smell.

And so this day, the day of the final flight, she too is crying, just like her mother. Never again will she be able to fill her nostrils with the aroma of her teddy daddy bear, for he too has departed for the last time.

In all, Concorde flew for about 30 years. Roy lasted 12 years longer – not much for a man.