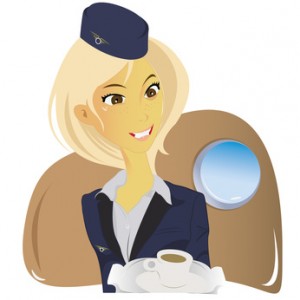 “Chicken or lasagne?” says the stewardess in a challenging voice. “Vegetarian please young lady,” commands the peroxide septuagenarian blonde in row 30. With her surly face and total disregard for others she reminds me of my defunct mother-in-law, better known as the ‘unmentionable’.

“And I’ll have a glass of water for my pills dear, no ice.”

“I have chicken or lasagne” drawls the air hostess, bored.

The toddler in row 36 bawls again; a goofy guy in an ‘I love NY’ baseball cap presses the call button for the umpteenth time for no reason. Schoolgirls race up and down the aisles. They sit in each other’s laps and set about scrutinising each other’s faces, like monkeys looking for nits, when all of a sudden this geyser in front of me reclines his seat with no warning whatsoever. It rams my laptop into my stomach, just as I am filling out that totally ridiculous US Customs form, and am on the question which says “do you intend to commit a felony while in the United States?”

Actually, no I didn’t but I do now! In fact, a meat cleaver would come in handy right now to plant in the skull of this total stranger, the back of whose smarmy bonse is now virtually in my face, so close I can smell it. He has some grey hairs I see, I wouldn’t be surprised if he’s bald by the time he’s forty.

Oh good, that might wake him up; perhaps I’ll be able to piece back together the two halves of my midriff.

“Chicken for me, please” I say.

As the toddler in row 36 screams and the peroxide unmentionable calls for a spoon to stir her fizzy powders, the stewardess lets forth a yelp and a yuck and cries “oh my god, I just put my finger through your sponge cake!”

Withdrawing a sticky pink thumb she sees to her dismay that an unmentionable gunge is clinging to it. So she shakes her hand in disgust, detaching the sticky cake from her digit and flinging it through the air. It silently splats in row 36, where the screaming wretch’s mother treads in it like dog’s muck on a Paris street and laments that this is definitely not her day.

Just then my wonky plastic American Airlines knife – a cutless wonder of modern times – snaps, shooting a dollop of barbecue sauce up in a majestic loop over the seat-back in front of me where, in another noiseless splat, it settles sourly on the sleeping scalp and oozes.

So now my sodding sudden seatback recliner is sporting two grey hairs and a splodge of congealed BBQ sauce betwixt. Oh look, isn’t this touching? His girlfriend has come over all lovey-dovey, and is about to run her fingers tenderly through his hair…